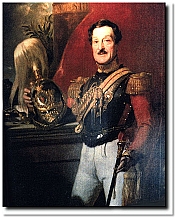 The Rt. Hon. Stapleton – Stapleton Cotton, Viscount and Baron Combermere and a Baronet, G.C.B., G.C.H., G.T.S., and K.F., a Field Marshal in the Army, Colonel of the first Regiment of Life Guards, Constable of the Tower of London, and Lord Lieutenant of the Tower Hamlets, was the second son of Sir Robert Salisbury Cotton, fifth Baronet and many years M.P. for the count of Cheshire, by Frances, daughter and co-heir of James Russell Stapleton, Esq., and was born at Llewonny Hall, Denbighshire, in 1773.

Adopting for his profession a military career, he was gazetted in February 1790 as second Lieutenant in the 23rd Welsh Fusiliers, from which he was afterwards promoted to a Captaincy in the Dragoon Guards Carabiniers. In 1798, commanding the 25th Light Dragoons, he took part in the memorable campaign against Tippo Sultan, including the Battle of Mallavelly and the siege of Seringapatam, under General (afterwards, Lord) Harris.

On the suspension of active hostilities in Hindustan, Major General Cotton, to which military rank he had been advanced, proceeded to the Peninsular in 1807, in command of a Brigade of Cavalry, consisting of the 14th & 16th Light Dragoons, distinguishing himself during the campaign in the north of Portugal, including operations at Oporto and at the Battle of Taverna in Spain. In 1809, the local rank of Lieutenant-General was conferred on him, and he was appointed to the command of the entire Allied Cavalry, which he held until the termination of the war in 1814, taking part in the various actions fought in covering the retreat from Almedia to Torres-Vedras, the Battles of Fuentes-d’onor and Salamanca, where he was second in command. He was frequently mentioned in the dispatches of Lord Wellington, and received the thanks of both Houses of Parliament.

In 1809, on his father’s death, he succeeded to the Baronetcy (his elder brother having died some years previously), and in 1814 his services were rewarded with a Peerage, a coronet having been bestowed upon him by the name, style, and title of Baron Combermere of Combermere Abbey, in the County of Cheshire.

He wasn’t present at the Battle of Waterloo, but was appointed immediately afterwards by Lord Wellington to the command of the Army of Occupation in France. In 1817, he was appointed to the Governorship of Barbados, and in 1820 to the command of the Army in Ireland, which post he held until 1825, when he was nominated to the rank of Commander-in-Chief of the Armies in India, where considerable resistance by native forces had brought to a standstill the military operations of The East India Company. By the capture of Bhutpore, the campaign was successfully concluded.

Because of his masterful handling of the forces employed and the brilliant strategy displayed, Combermere’s reputation was considerably enhanced. He was thanked by the Governor-General and both Houses of Parliament, being advanced in the Peerage to the dignity of Viscount. In 1830, he returned to England and in the same year was appointed Provincial Grand Master, Cheshire, in which office he remained until 1865.

During his stay in India, he was Initiated, Passed & Raised in The Star of the East Lodge No.69 E C Calcutta. The dates of his Initiation & Passing are unknown, owing to the condition of the Minute Book of 1827, only one page being legible.
It reads:

Opened the Lodge in due form.

Read the proceedings of last Meeting which were approved and recorded.

Brother Viscount Stapleton, Lord Combermere, having duly served his apprenticeship and having duly passed to the 2nd degree, is reported in attendance at the outer door of the Temple and craving to be admitted to the 3rd degree.

After due examination and the usual preparations are reported satisfactory, he is admitted to the Lodge and duly raised to the High and Sublime degree of a M.M. according to ancient form and the usual ceremonies.

There being no further business, closed the Lodge in due form, with a solemn prayer, retired to a brotherly banquet.

Lord Combermere became Master of the Lodge in 1830, but resigned on leaving India. Such was the illustrious Mason after whom our Lodge was named, and whom, by special bequest, bequeathed to us the right to have engraved upon our P.M.’s jewel, and included in our badge, his Coat-of-Arms.

Arms of the Combermere Lodge 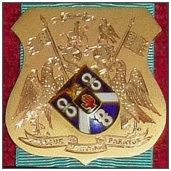 On a scroll underneath appears Lord Combermere’s motto “Utraque Fortuna Paratus” (Ready, prepared for adventure or adversity, literally “Prepared in all circumstances”)”.

The following is a description of Lord Combermere’s bequest, written in 1913, by W.Bro. Wm. Burston P.M., PAGDC, P. Secretary and Chaplain.

“On that Coat-of-Arms, as I have stated, are various emblems. The small azure shield has on it three bales of cotton, emblematical of the family name. They look like three eights and may also be considered to have a Masonic reference so well known to you Brethren. This little blue shield, with the open hand and red heart in the centre, the insignia of a Baron, is a representation of the medal presented by the King to the first Viscount Combermere after the battle of Salamanca.
Over this medal, on the right, is a falcon with the wings expanded and holding in the right claw, a belt. On the left, a Cavalry Officer of the 3rd Regiment Light Dragoons in full charge, and over this is a scroll with the word Salamanca in gold letters. The whole is supported by two falcons, each supporting a spear with a standard flowing from each, the whole having a warlike appearance.