Formation of the Lodge

First promoted in 1857, Combermere Lodge was formed under a Dispensation Warrant issued by the Provincial Grand Lodge of Victoria early in 1858 with the number 1054. On March 29th, 1858, Provincial Grand Lodge granted a dispensation “Since last Quarterly Meeting announced to Mariners Lodge, Melbourne, Sandridge Marine Lodge, Combermere Lodge, East Collingwood”. (Extract from Proceedings Prov. Gnd. Lodge (Vic.) 1858). Unfortunately, the early records of the Lodge, prior to 1899 have been lost, although the original Register containing names of all members since the inception of the Lodge is still in use.

However, the minutes of Lodge Meetings, correspondence, etc., or such other material as would provide information concerning Lodge happenings, especially during its formative years, being unavailable; it has been particularly difficult to ascertain items of factual historical interest for presentation to the members of Combermere at the Centenary meeting of the Lodge.

One of the most striking features of our Centenary year is the fact that our present Master, Bro. C. W. Hyndman, is a third generation member of the Lodge. His grandfather, the late Bro. Chas. Hyndman, was initiated on the 17th February, 1887, and his father, Wor. Bro. V. L. Hyndman, P.M., O.G.R., on the 21st November, 1909. He is also a fourth generation Mason, his great grandfather was an officer of the Provincial Grand Lodge of Victoria (I.C.) in the year 1860.

It is noteworthy also that the Centenary not only marks the passing of 100 years since the inauguration of the Lodge, but also a century of allegiance to that great and glorious mother of all our Constitutions, the United Grand Lodge of England.

At a meeting held at the Swan Hotel, Gertrude Street, “East Collingwood” on October 29th, 1857, the Lodge took form and the first entry in the Lodge Register is so dated, the following being mentioned as “Founders of the Lodge”:— Joseph John Moody, Melmoth Hall, Thomas Greenhall Atkinson, John Barnett, Charles Le Cren, Arthur Thomas Porter, Samuel Turner, Smith Wallworth, and Henry George Keane. A further meeting was held on November 6th, 1857, and the Register shows an accession of 15 members, making 24 in all. 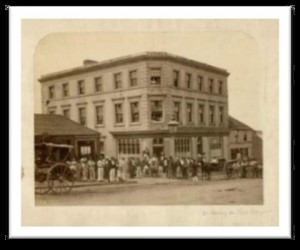