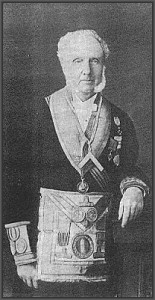 RW Bro. Joseph John Moody, first Master of the Combermere Lodge, came to Victoria in 1852. He was brought to the Colony to occupy the office of Town Clerk of the Municipality of East Collingwood, the first Municipality to be established outside Melbourne. However he was not installed in that office until 1855, in which year the Municipality was proclaimed.

It might be mentioned that he had obtained considerable experience in civic affairs as Shire Clerk in the Count of Lincolnshire. He had also gained Masonic eminence, with the rank of Past Prov. Grand Deacon (Lincolnshire), also Past Prov. Junior Grand Warden (Cheshire). It was with this latter distinction that he served under R.W. Bro. Lord Combermere, District Grand Master, from which circumstances the name of our Lodge is derived. He had been Past Master of Lodge Unity No.403 (Cheshire), Virtue No.177 (Lincolnshire), and Lodge Lindsay No.602.

In 1863, He promoted the idea of establishing a home for “aged and decayed Freemasons”, and taking advantage of a strong Masonic feeling in the McCulloch government, then in power, was able to influence the passing of a Bill, setting aside by Colonial Land Grant of a piece of land, in extent 5 acres and 21 perches, known as No.3 Punt Road for the purpose mentioned, the Act being passed in November 1864. It may be mentioned that J. J. Moody was appointed by Parliament as the first (and at the time, only) Trustee.

Three years passed, before, in 1867, sufficient funds to fence the property were available, and on 17th May of that year, three District and Provincial Grand Lodges were opened in the Prahran Town Hall by the English, Scottish & Irish Constitutions, after which the brethren marched to the site when the land was dedicated and foundations of the first two cottages laid.